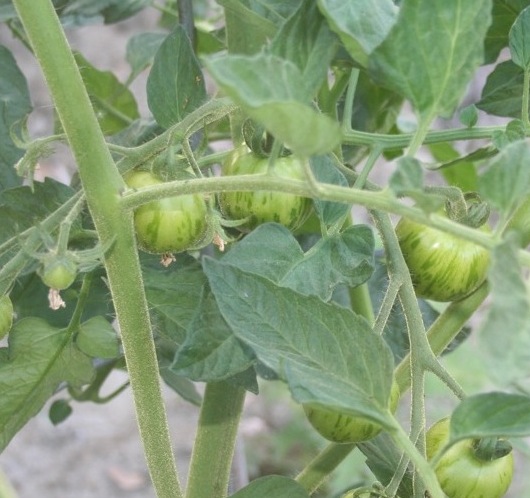 This is Mr. Stripey,  planted in early April 2013.  This photo is at the end of May.  Mr. Stripey is looking good !  Two other Mr. Stripey’s are growing, planted later to lengthen the season.    Also growing are:   Sungold Cherry Tomato,  Millions of Cherries,  Cherokee Purple,  Carmello  and Brandywine.  Sungold is doing wonderfully, well over 7 feet tall and 8 feet wide and covered with little soon to be tomatoes.   It is growing off the corner of the verandah where Millions of Cherries are usually planted. 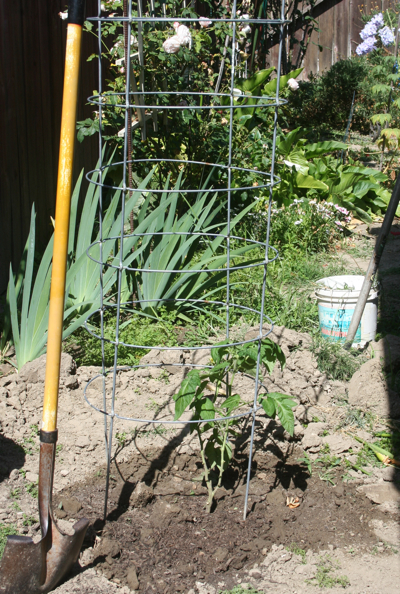 Brandywine alongside the Veranda

I have put in the cherry (millions of cherries that we loved so much last year) at the end of the veranda.  Decided to put an Early Girl by the roses where the Brandywine overwhelmed them last year.   The Early Girl should be better behaved and I want to see how good they taste on Jacaranda Street.    It turns out that the nights have been in the low 50s which isn’t that great for the tomatoes, but…..  I haven’t put the Brandywine in yet, in fact, he is staying inside at night.   Have decided to put him in front of the tree, where the sun shines most of the day.   I had hesitated because of the doves, but now that they are history, due to neighborhood cat,  I can dig over there, where I hadn’t wanted to before.    Haven’t decided if I want to use a cage or bamboo tee pees for the Brandywine.     Also, even though I had decided only to do three this year,  I may sucumb to curiosity and good things I have heard about Legend.      Maybe I’ll wait until the sweet peas are past and put one there….

A little late to start, but……   The San Fransisco Fog is over SEVEN Feet tall, and climbing into the tree.  Many green tomatoes and flowers setting more every day.

So this was taken back on May 18, and you can barely see the tomato cage for the SF Fog tomato.  You can’t really see it in this photo, it is behind the poppies and to the right of the foxglove…. 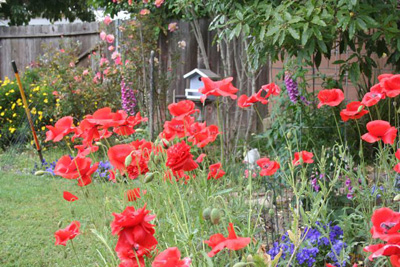 Here is a photo of Bruschetta I made with the Abraham Lincoln’s, Millions of Cherries and SF Fogs: 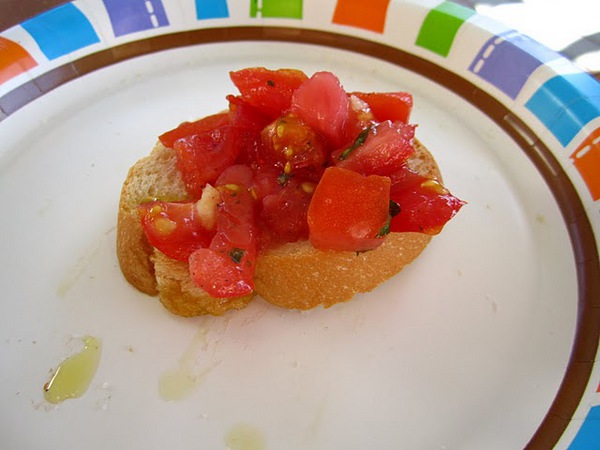 So now it is mid September and I have ripped out the Brandywine and SF Fog.   The cherries will come out tomorrow.   The Abraham Lincoln is still producing.  It is the only one I didn’t put in a tomato cage.   It has a high percentage of eaten tomatoes (bugs or possums) but also plenty of clean ones.   The cherries always had oodles of birds in there, and I thought there would be none left.  But it seems now that they were eating bugs in there, because almost all of the cherry tomatoes were in good shape.   Probably only 10% with bird pecks.   For the fun of watching the birds, and their bug control, I am happy with that number.

The Brandywines took forever to set and forever to ripen,  but, finally, finally,  the tomato I have been looking for!!!!  Flavor packed, and just how a tomato should taste, in my estimation.    Five years later, finally a tomato worth its trouble.   The millions of cherries were too, and will grow them again.

The Brandywines will have to go in a different spot, they overwhelmed the roses, and the Julia Childs grew to 8 feet to reach the sun over them.  Then the Brandywines grew into the Julia Childs.    They so outgrew the tomato cage.   NExt yeat I will cage and make a teepee over it too, or maybee two tee pees and crossbars over it.

A Garden is a Friend you can visit anytime.

I Already Said That 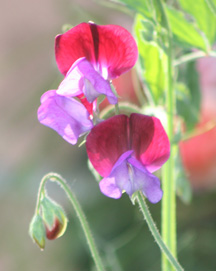 ""We can complain because rose bushes have thorns, or rejoice because thorn bushes have roses.""

Some Places To Visit

This Month In The Garden

Sara Stein on My Weeds

I appreciate the misunderstanding I have had with Nature over my perennial border. I think it is a flower garden; she thinks it is a meadow lacking grass, and tries to correct the error. 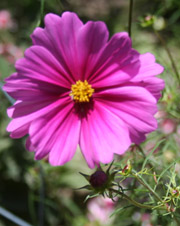 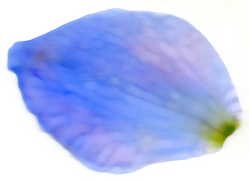 "It is at the edge of a petal that love waits." - William Carlos Williams